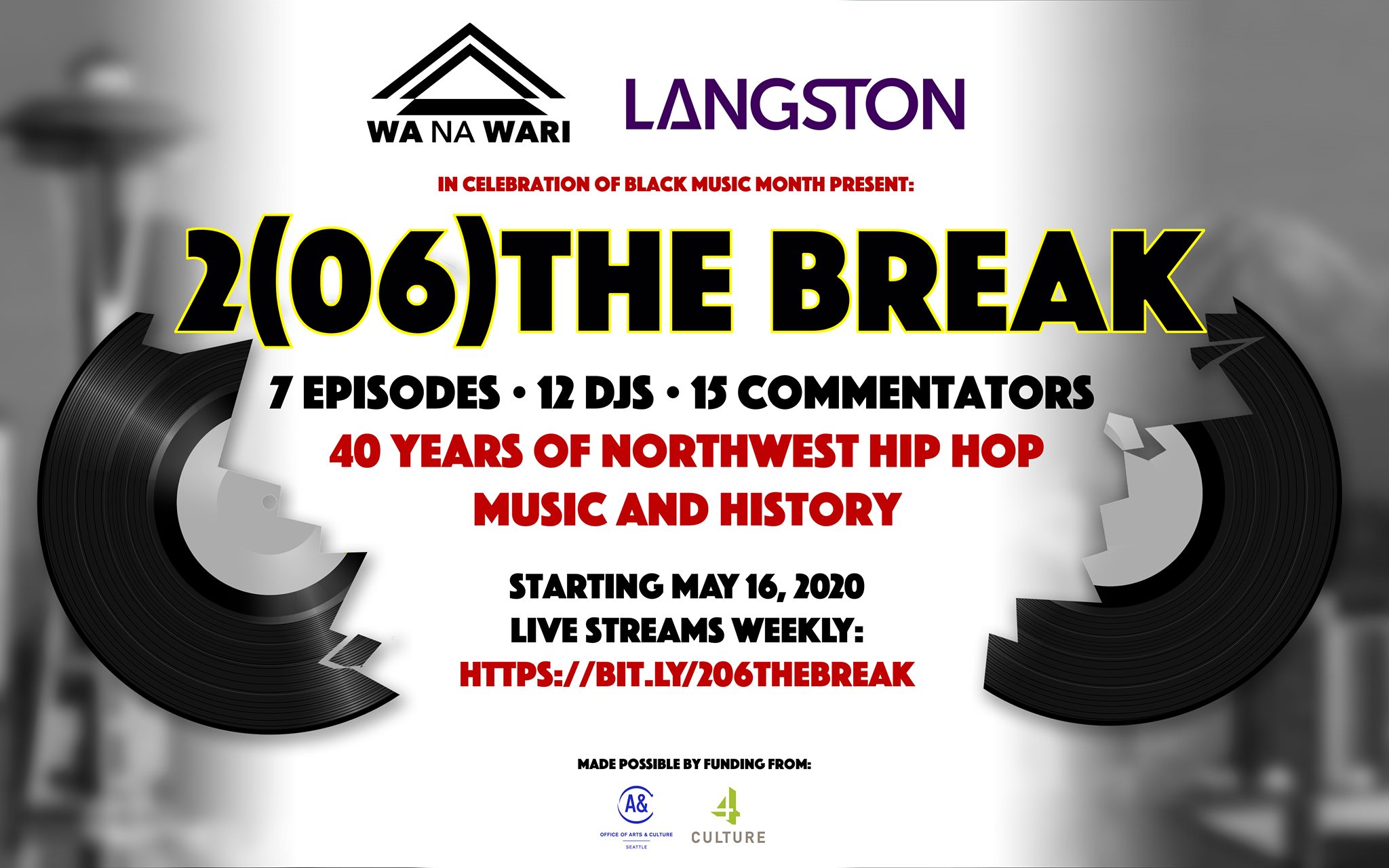 Highlighting Local Hip-Hop of the 1990s

2(06) The Break live streams every Saturday, 7-10pm through June 27th at bit.ly/WaNaWariLive

In celebration of Black Music Month, Wa Na Wari and LANGSTON are partnering to present 2(06) The Break, a seven-episode series that takes a uniquely local ‘spin’ on the live streaming DJ sessions popularized by cultural icons like Questlove and DJ D-Nice via social media these past two months. Each week, Jazmyn Scott, Seattle hip hop supporter and co-curator of the 2015 Legacy of Seattle Hip-Hop exhibit at MOHAI, will pair two Pacific Northwest hip hop DJs per episode to collaboratively program and record a set composed exclusively of songs by local hip hop artists of a specific era, from the 1980s to the present. Each DJ set will be presented in a live stream program hosted by two local hip hop luminaries who will bring their unique insight to the tracks in the program and the local culture and music scene of the era represented in the episode. 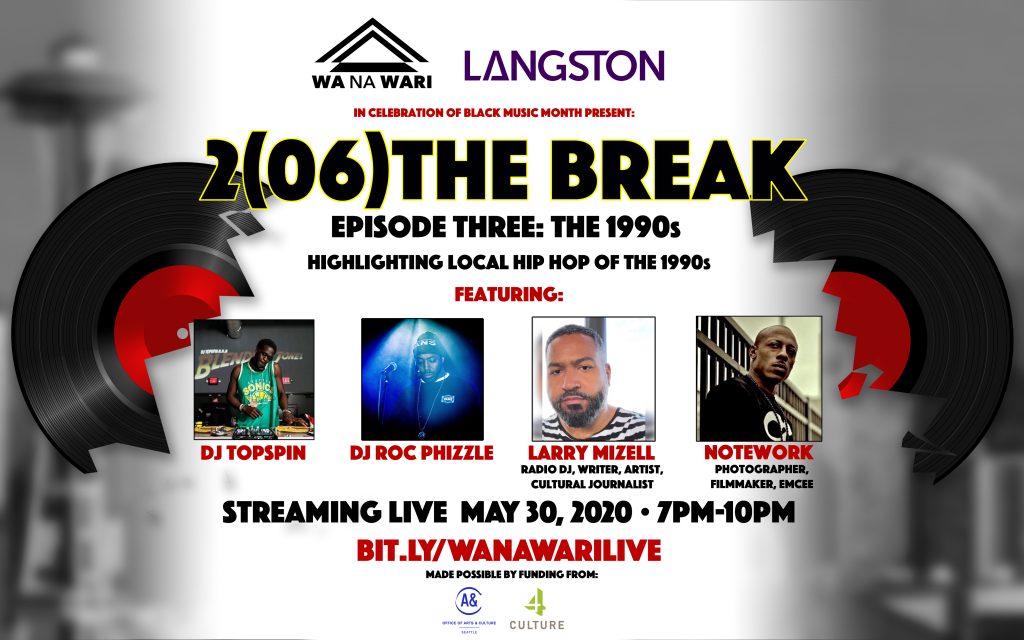 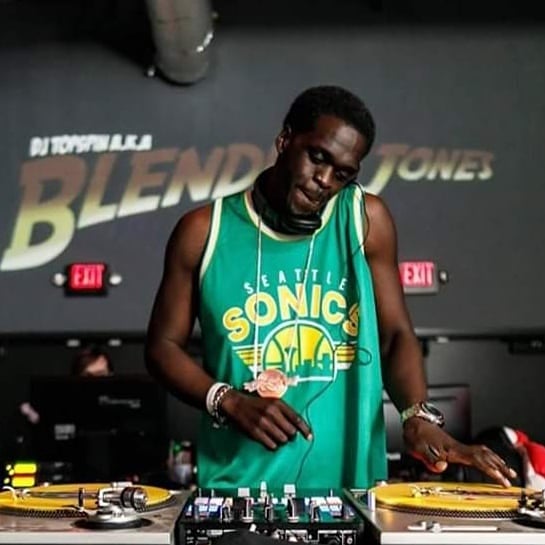 DJ Topspin aka Blendiana Jones
DJ Topspin is established as a musical pillar in the Northwest and increasingly across the world. He [seemingly] easily weaves a complex blend of hits & unearthed genre-spanning gems from both past & present eras, creating a musical tapestry all his own. He’s particularly renowned for his harmonic ear, showcased by his signature blends / remixes, selection & timing; as evidenced
by the “a.k.a. BLENDIANA JONES” addition to his moniker. The nickname says it all, as he’s left his sonic imprint on Seattle’s cultural nightlife scene throughout the span of his just under 25 year long career & has plans to continue taking his talents far & wide globally. Born from a Jamaican father & Panamanian mother, the pulse of the diaspora [in the form of dancehall / reggae / soca / afrobeat] is always present in his musical displays. He’s recently showcased them in The Kingdom of Bahrain for the 2nd time in as many years, & has produced a weekly countdown show broadcasted throughout Tanzania [where he’s spun 3x so far] & to other African nations. ‘Harmony-heavy flavor for those that love to dance’ is the envelope he pushes via the records [he pushes & pulls]. Make no mistake; “you need it from the TOP!!!” 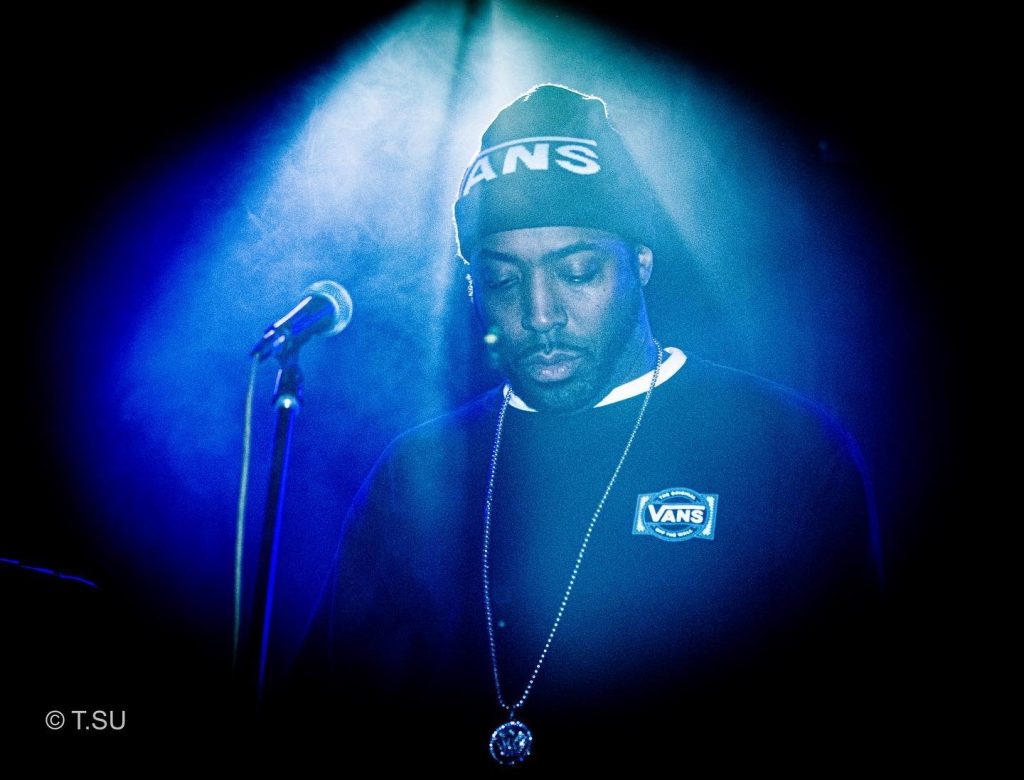 DJ Roc Phizzle
The quest began in the summer of 1990 when Jamal “ Roc Phizzle” Robinson moved to Seattle. He started attending local parties as a dancer, until he eventually got a chance to showcase his other hidden talents. In the late 1990’s, he started deejaying at local parties as well as lending his musical talent to help others with demo projects. He would eventually earn a name and become a martyr in the Seattle music scene.
Roc Phizzle is currently touring with The Original Lakeside, the drummer and musical director for Oncore (cover band), keyboardist & vocalist for funk/soul band F2D (Funky 2 Death) and a DJ in the Bamboo Beats Collective (special event DJ’s). 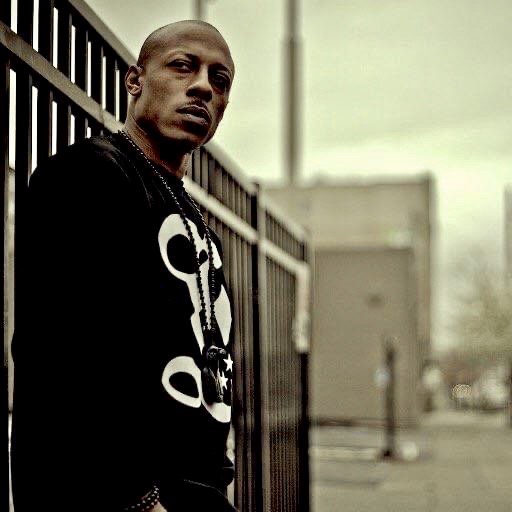 Notework
Notework (aka C-Note) has been a fixture in the music and arts scene in Seattle since the mid-90’s. His journey began as a member of the hip hop collective Tribal Productions where he along with Tizzy T formed the rap group Narcotik. The two went on to create the classic album, Intro To The Central, a lyrical 206 time capsule with early production by Vitamin D and Topspin. Several projects followed and culminated with Note being featured on the track Home, a soulful ode to the Emerald City produced by Jake One.
Looking to expand his impact on the game, Note transitioned in the early 2000s. He exhibited a new passion for film/video and photography, directing and shooting music videos and short features. Today, Notework is the founder of Alive & Black LLC, a video production, photography and streaming media company dedicated to showcasing the rich, colorful and complex lives of Black people in the fields of business, technology, health, the arts and sciences. 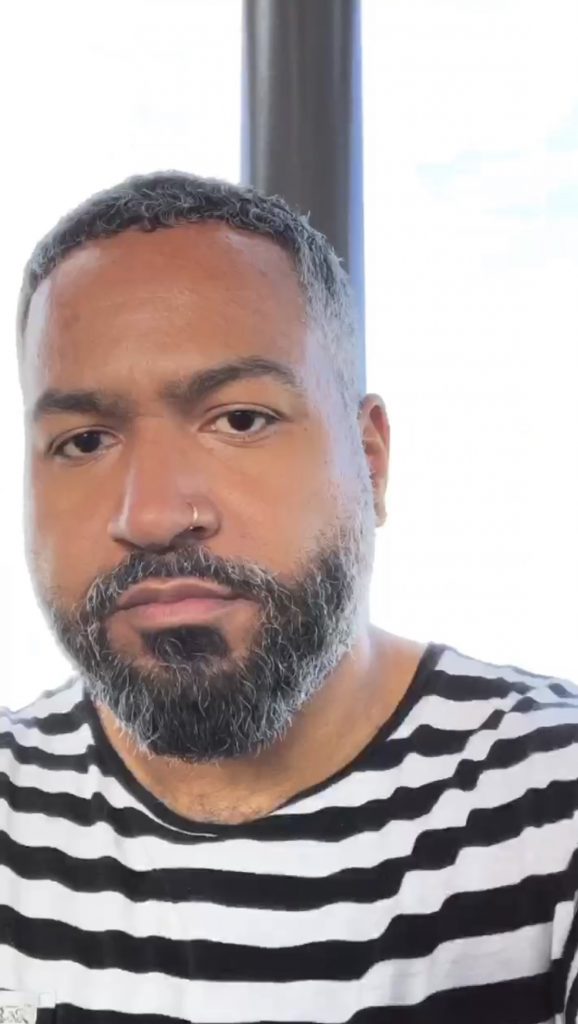