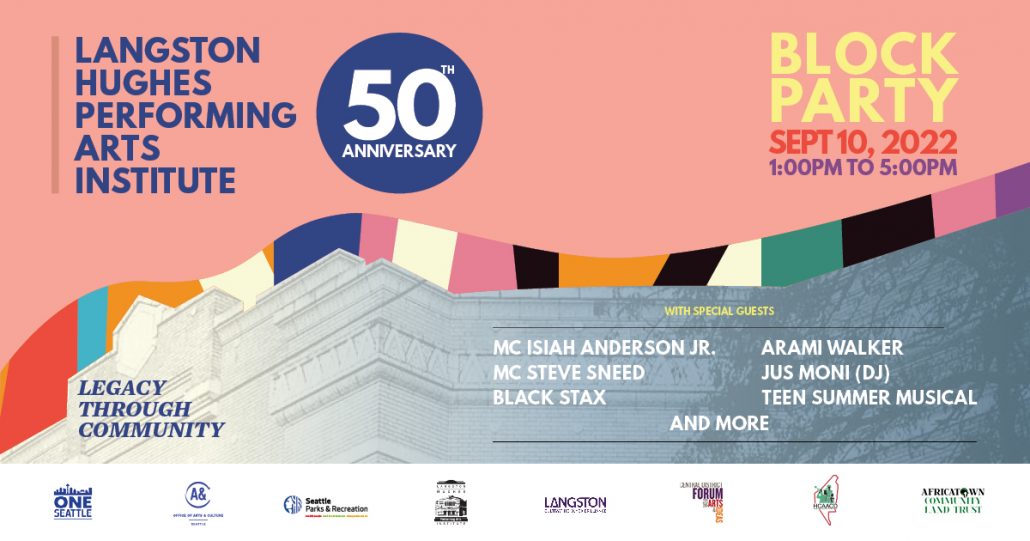 The Seattle Office of Arts & Culture (ARTS) announces the 50th Anniversary Celebration for the Langston Hughes Performing Arts Institute (LHPAI) will be held on September 10 from 1-5 p.m. Please join us as we celebrate the community members and artists that have sustained LHPAI over the past 50 years. Mayor Bruce Harrell will welcome the community.

Organized in collaboration with LANGSTON and the Central District Forum for Arts and Ideas, the program will feature, highlight and honor key members of the LHPAI community who have contributed to its longevity and who are instrumental in shaping its future.

Built in 1915 and named after the renowned African-American cultural luminary, Langston Hughes, the Langston Hughes Performing Arts Institute (LHPAI) is a historic landmark in the historic Central Area of Seattle. Designed by B. Marcus Priteca, and formerly the orthodox Jewish Synagogue of Chevra Bikur Cholim, the building became a community center and part of the City of Seattle’s facilities in 1972. It underwent extensive renovations in 2011 to preserve its architectural character and update the facilities.

For 50 years, and throughout multiple iterations and re-imaginings, LHPAI has played a central role in the artistic, cultural, and social life of Seattle’s Central District. LHPAI has always been an engaged neighbor and cultural partner welcoming Central District community members and organizations as well as those operating throughout the city of Seattle.

Special thanks to our promotional partners Black Heritage Society of Washington State and the Central Area Neighborhood Council.