A FILM BY WILLIAM GREAVES

Join us for a special Fade to Black screening of Nationtime. 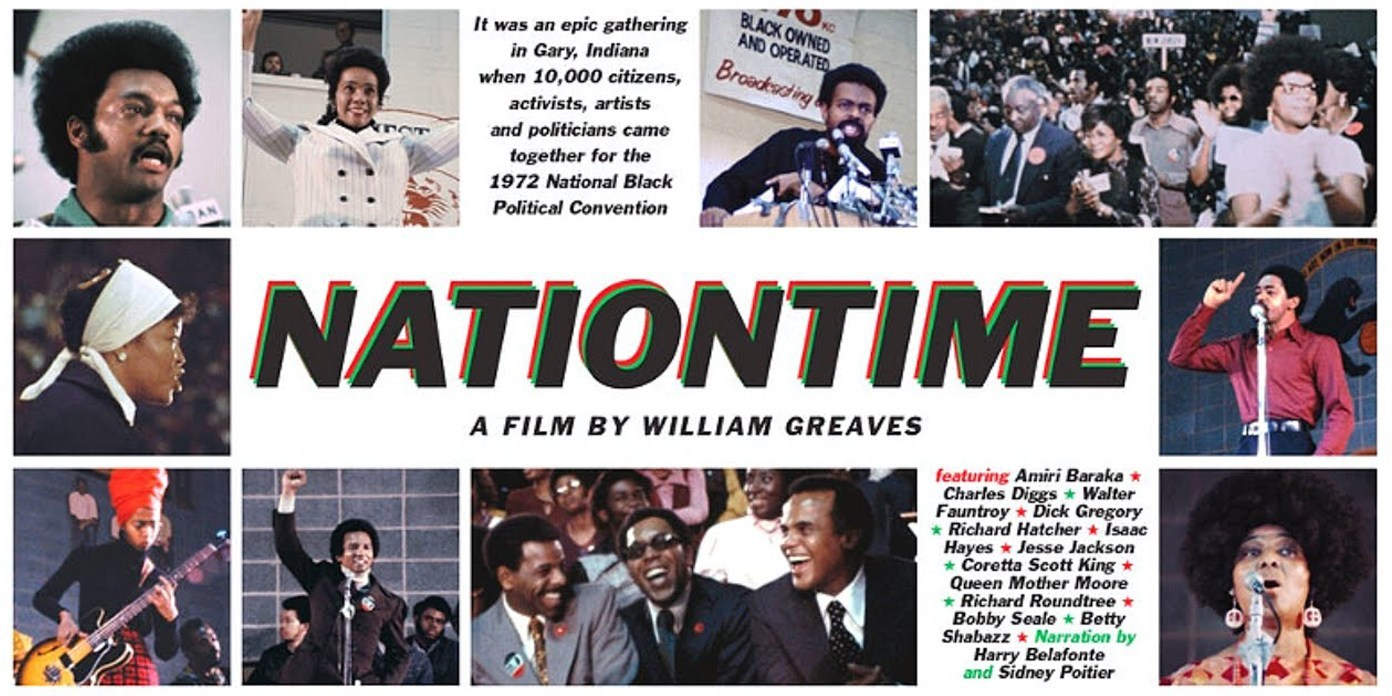 LANGSTON is proud to present this very special Fade to Black screening opportunity. Best known for his avant-garde meta-documentary Symbiopsychotaxiplasm, William Greaves (1926–2014) was also the director of over 100 documentary films, the majority focused on African American history, politics, and culture. Nationtime is a report on the National Black Political Convention held in Gary, Indiana, in 1972, a historic event that gathered black voices from across the political spectrum, among them Jesse Jackson, Dick Gregory, Coretta Scott King, Dr. Betty Shabazz, Richard Hatcher, Amiri Baraka, Charles Diggs, Isaac Hayes, Richard Roundtree, and H. Carl McCall. Narrated by Sidney Poitier and Harry Belafonte, the film was considered too militant for television broadcast at the time and has since circulated only in an edited 58-minute version. This new 4K restoration from IndieCollect, with funding from Jane Fonda and the Hollywood Foreign Press Association, returns the film to its original 80-minute length and visual quality.

Fade to Black is a monthly film series that focuses on the Black image in film. After launching the series in late 2019, we began exploring the horror genre and screened films like Horror Noire, Blacula, Candyman, Night of the Living Dead, and more. Screenings also include conversations with actors, directors, scholars, and fans to talk about particular films and their impact on culture. Some of our past guests have included, Candyman actor Tony Todd, The Craft actor Rachel True, screenwriter Marc Bernardin, The Invitation actor Emayatzy Corinealdi, Black Panther stunt actor Gui DeSilva Greene, and writer Tananarive Due, to name a few.

In addition to screenings and discussions of genre films, we also host special screening events around a range of topics and themes.

After completing your purchase, you will receive an email with a link and redemption code. After redeeming, your rental period will start immediately and last for seven (7) days. You can watch the film as many times as you want in those seven days.

You can watch on your computer, phone, or most tablets. You can also download the Kino Now app for Roku, Amazon Fire Stick, or Apple TV (tvOS 9.0 or later). All viewing methods require high bandwidth internet connection.