examining the secrets and traumas we carry in our bloodlines

By examining the secrets and traumas we carry in our bloodlines, playwright Darren Canady urges us to decolonize and deconstruct the dominant narrative.

Rory’s life is looking like a classic Great Plains dead-end: a job she hates, a sick grandmother who depends on her, and dreams that just can’t seem to materialize. However, a new technology developed to help humans harness the power of their own blood to relive history promises to give Rory the chance to hit a major pay-day. Played out over three time periods, Rory’s quest to uncover and honor the truth of her family’s past has far-reaching effects she could have never imagined. This is Reparations.

Seattle Times art and culture reporter, Brendan Kiley said in his Janary 15th review, “Reparations” doesn’t pretend to answer the thorny questions it raises, beyond an affirmation that whatever damage lies in the past, we owe our love to the present. But sometimes asking, not answering, is the key.” 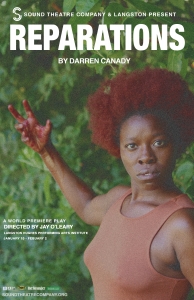 Seating for our patrons with disabilities is FRONT ROW Center for all performances.

Patrons who cannot traverse stairs are also welcome to take a seat in the front row.  Please note when you purchase your tickets if you would like to use Front Row seating.

Thank you for your gift.