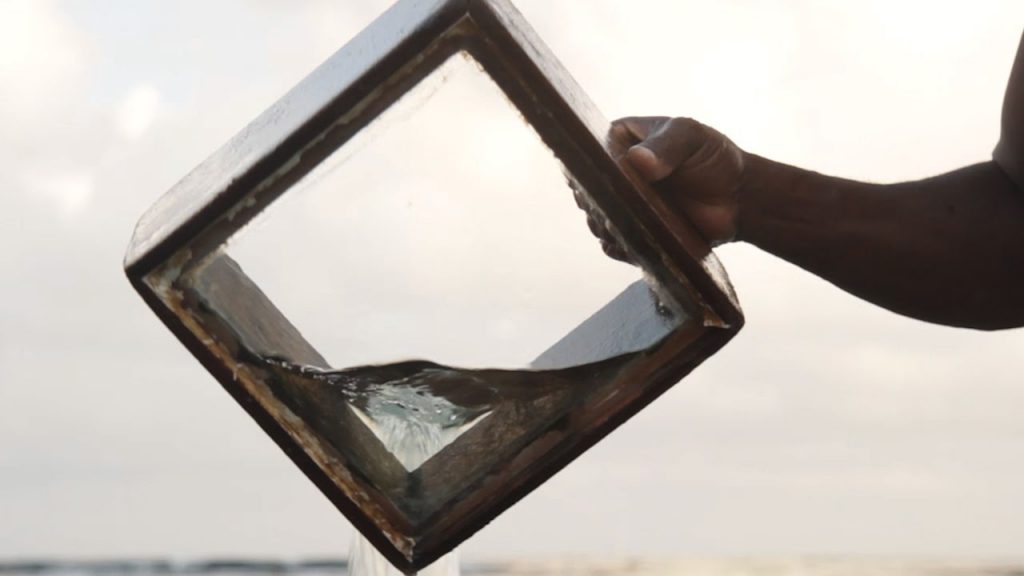 The Frye celebrates the final weekend of the landmark exhibition Black Refractions: Highlights from The Studio Museum in Harlem with a special screening program of artist videos and short films curated by Black Cinema Collective. With a view to expanding and “refracting” The Studio Museum in Harlem’s focus on the art of the African diaspora, the screening features works by artists both in and beyond the Black Refractions exhibition.

Lorna Simpson came to prominence in the 1980s with her pioneering approach to conceptual photography. Simpson’s early work– particularly her striking juxtapositions of text and staged images– raised questions about the nature of representation, identity, gender, race and history that continue to drive the artist’s expanding and multi-disciplinary practice today. Her works have been exhibited at and are in the collections of the Museum of Modern Art, New York; the Museum of Contemporary Art, Chicago; the Walker Art Center, Minneapolis; Whitney Museum of American Art, New York; and Los Angeles Museum of Contemporary Art, Los Angeles; amongst others.

In Simpson’s video Cloudscape, a solitary Black male figure (played by artist Terry Adkins, also included in Black Refractions) whistles a tune as a thick fog slowly envelops him. As described by curator Okwui Enwezor, the piece “appears to be a song of departure from the charnel house of the racial sublime.”

An artist, musician, and Peabody Award-winning filmmaker, Terrance Nance has written and directed feature-length films including An Oversimplification of Her Beauty (2012) and the 2018 HBO series Random Acts of Flyness. He wrote, produced, and directed Space Jam: A New Legacy, starring Lebron James, which will be released this summer.

Blitz Bazawule is a Filmmaker and Musician born in Ghana and based in New York. Blitz’s feature directorial debut The Burial of Kojo premiered on Netflix in 2019 and as co-director of Beyoncé’s Black Is King, he earned a Grammy nomination in 2020. Blitz is currently directing the Warner Bros musical film The Color Purple, produced by Oprah Winfrey, Steven Spielberg, Quincy Jones and Scott Sanders.

Nance and Bazawule’s early short Native Sun follows protagonist Mumin who, following the death of his mother, travels from his home in Ghana’s rural northern region to Accra in search of the father he has never met.

In Mango, Mango, two versions of the artist compete in a mango eating competition that interrogates cultural practices around the eating of the fruit. The split screen format points to the duality of experience for individuals living in communities where the cultural practices that come as second nature to them deviate from the status quo.

Jamaican artist Deborah Anzinger’s works across painting, sculpture, installation, and video explore questions of power, value, and being. She uses the structure of pre-existing systems as a tool to break these same systems apart, recontextualizing them as surreal artefacts. In this way her work examines psychical fragility and a desire for transcendence and existential freedom.

Autumn is part of an intended series of experimental shorts filmed by the artist, set as improvisational interviews and recordings of friends and colleagues. Here footage of another subject appears inside the mouth of Chicago-based artist Autumn Knight. As long as Knight smiles, the viewer can see the man with whom the narrator seems to be speaking, but it remains unclear whether the dialogue we hear actually corresponds to the interaction we are witnessing.

In Jaunt, the subject of water evokes notions of malleability and movement. Ward uses the visual reference of a frame to highlight water’s resistance to contained spaces, juxtaposing footage of explosive sprays of mist at an American car wash with that of a Jamaican fisherman who floats a glass-bottomed box on the surface of the ocean, creating a tiny movable window into the world below.

Nuotama Frances Bodomo is a Ghanaian filmmaker based in New York City whose award-winning short films have played at festivals including Sundance, the Berlinale, Telluride, Rotterdam, SXSW, and New Directors/New Films. Her short Afronauts was exhibited at the Whitney Museum as part of the group exhibition Dreamlands: Immersive Cinema and Art, 1905-2016, and at the 2018 Venice Biennale Architecture (US Pavilion) as part of Dimensions of Citizenship.

In her video Boneshaker, a West African family—lost in America—travels to a Louisiana church to find a cure for their problem child.

Commissioned by the Moving Pictures and Borders Project, for those who mispronounce my name is based on Kayo Chingonyi’s poem of the same title, which focuses on the historical weight and magical power of naming.

Courtney Desiree Morris is an artist and an assistant professor of Gender and Women’s Studies at the University of California, Berkeley. She is currently completing a book entitled To Defend this Sunrise: Black Women’s Activism and the Geography of Race in Nicaragua. Her artwork has been exhibited at the National Gallery of Jamaica (Kingston); the Museo Thyssen Bornemisza (Madrid, Spain); Yerba Buena Center for the Arts (San Francisco, CA); and the Photographic Center Northwest (Seattle), among other venues.

Sopera de Yemaya is an experimental short film in seven chapters, each of which is named after a specific path of the goddess Yemaya as practiced in the Cuban Lucumí tradition. Yemaya has many caminos or paths, which represent the different aspects of her power and divinity. The camino also determines what is placed in Yemaya’s sopera, which houses the misterios and ritual objects that are associated with her. Morris’s film considers what it means to be a container for the divine while also grappling with her experience as a Black woman becoming a mother in a moment of resurgent anti-black racism, state violence, political instability, and global pandemic.

Brooklyn-based artist Steffani Jemison uses time-based, photographic, and discursive platforms to examine “progress” and its alternatives. Jemison’s work has been exhibited nationally and internationally at the Stedelijk Museum, Amsterdam; the Museum of Modern Art, New York; the Studio Museum in Harlem; Museum of Contemporary Art, Chicago; Nottingham Contemporary, UK; and LAXART, Los Angeles, among other venues.

Like her video Maniac Chase (2008–2009) included in the exhibition Black Refractions, Jemison’s Escaped Lunatic was created in response to her study of the chase genre, which originated in the first decade of 20th-century film. Both videos use repetition and subtle differences in action and shooting styles to depict a series of vignettes in which identically dressed individuals chase one another through urban landscapes. Manipulating chronology, duration, and character psychology, the video presents visual and narrative metaphors for the contemporary Black American experience, and for perceived and actual social progress.

Crusader breathes new life into discarded materials, transforming a shopping cart like those often used by the urban-dwelling homeless into a warrior’s mount. The jury-rigged vehicle and its cast-off contents become a fantastical mixed media sculpture that offers very real commentary on the values of contemporary American society.

Afronauts takes us back to July 16, 1969: America is preparing to launch Apollo 11. Thousands of miles away, the Zambia Space Academy hopes to beat America to the moon. Inspired by true events.